Soon I will be headed back to Phoenix for one more week of heat!  I will land at Sky Harbor Airport, and it will hit me like a brick wall – the unmistakable wave of HEAT that punches you in the face as soon as you step out of the terminal!  At least I will return home on an evening flight – night air is warm rather than blazing hot.  I no longer want to move away from this heat, I need to move away from it.  I have been thinking lately that my body doesn’t seem to handle the heat as well as it once did, but my reasons for leaving go beyond that now.  I became aware of this on the first really hot day back in March of this year, March 27 to be exact.  It was a Friday.  I had two appointments and several errands on my task list.  Into the car, out of the car.  The temperature inside the car was greater than the 97 degrees Fahrenheit displayed on my phone’s weather app.   It seemed too soon for such hot weather, but it wasn’t extremely out of the norm.

The details of that day have been blurred by time – or by something else; I should have recorded it as it unfolded, but I was too busy.  My first appointment was a routine stop at the chiropractor.  Not too hot yet.  I went home to collect a trunkful of items to drop off at the local charity store.  I had to think a minute or two about where to go next.  The post office?  Yes, the post office to mail a package or two.  By now the brain fog set in.  Oh yes, another appointment further down the road.  I started feeling disoriented and forgetful.  By now it was afternoon and I needed lunch.  I wondered if I should break my own rules and grab a quick pack of chicken nuggets from MacDonald’s.  Not appealing. Should I turn right or left?  Back on the freeway or not?  I had to run to the outlet mall and pick something up. What was that?  I couldn’t seem to remember but drove in that direction anyway.  More fog.  Oh my goodness!  Why couldn’t I remember?  Was it the heat?  No, not hot enough for heat exhaustion.  I fought off micro-bursts of thought that it could be early-onset Alzheimer’s.  I brushed each episode off since I had gone to the movies with my friend the day before to see “Still Alice”.  Great movie, except for the fact that scenes were now flashing randomly before my eyes as I drove in the hot car from one locale to the next.

When I arrived at the outlet mall, I couldn’t remember what I was supposed to get until I realized my daughter had picked it up already and I didn’t need to get it anymore.  Please don’t let this by early-onset Alzheimer’s.  I tried to find a place to eat lunch except that I was surrounded by motorcycles!  Of course, I would get here during the first day of a bikers’ convention.  It looked like they were having fun, but every place was crowded, and forgot what I was trying to accomplish — again.  Okay, I determined I should go home for lunch – if I could find my way there.  On the last stretch of road near my subdivision I heard a siren.  I saw a yellow fire truck coming from the other direction, so I followed other vehicles off to the side of the road.  The firetruck passed.  We moved on, and I entered the street leading to my neighborhood.

Surrounded by familiar sights, I thought of the young officer who sat with me while the paramedics administered to my husband in the back yard.  I thought of his kind eyes and his understanding words, then like bullets firing I remembered the rest! The horrific heat of that day.  The shrill screams that left my voice debilitated for months afterwards.    I remembered the confusion….this can’t be happening….where is my phone….911 operator…….You have to get him turned over….. It was hot.  My mouth was dry…..like it was now.  The confusion…..I relived the confusion and cried.  In fact, I sobbed hoping to make it to my house before the tears got the best of me, but it was no use.  I cried harder.  I wasn’t getting Alzheimer’s disease.  I wasn’t suffering from heat exhaustion.  Perhaps it could be better diagnosed as a sudden flash of mild PTSD.  I hate the heat.  I hate what it triggers, and I want to leave.  I need to leave.  One more week until I will leave.  I will leave the heat to make new memories – cool ones! 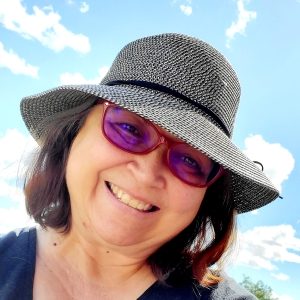